While not as deadly as head-on collisions or rollover accidents, side-impact crashes can cause serious injuries. These types of crashes accounted for 23% of passenger vehicle occupant deaths in 2018, according to the Insurance Institute for Highway Safety (IIHS). Also referred to as T-bone accidents, these crashes occur when one vehicle slams head-on into the side of another at a 90 degree angle.

If you suffer serious injuries in a T-bone accident, you might be entitled to compensation for medical bills, lost wages if you are unable to work, and pain and suffering. Here’s what you should know if you are involved in a side-impact crash. 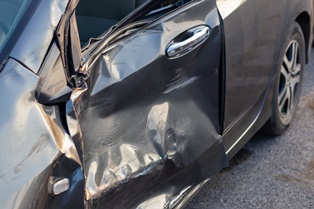 T-bone accidents almost always happen because someone did not yield the right of way. But while the responsible party in a side-impact crash may seem obvious, making this determination can be complicated. If a T-bone accident occurs because a driver was making an unsafe left turn, that driver is often deemed liable for failure to yield the right of way. A driver who ran a red light or didn’t stop at a stop sign could also be found partially liable. And a driver who’s distracted because he’s texting or under the influence of alcohol will likely be at fault. However, it’s possible that the driver was pushed into the other vehicle by a negligent driver. And often, the driver will insist that he had the right of way. Thus, it’s not always easy to establish fault for the crash.

Because they often occur at intersections, T-bone accidents are more likely to have witnesses who can provide details about what happened. Some intersections have cameras, which can make it easier to determine who was responsible.

Injuries After a Side-Impact Accident

The impact force of a T-bone accident usually causes the car door to collapse. Windows may also break. Neck, head, and back injuries are common, with strains, sprains, whiplash, herniated disks, pinched nerves, and spinal cord issues occurring in many cases. Broken bones in the pelvis, hips, arms, and ribs are not uncommon.

As with other car accidents, the following factors will impact the extent of injuries:

Steps to Take After a Side-Impact Accident

After any car accident, it’s important to call the police and/or 911. Even if it doesn’t appear that anyone is injured, sometimes internal injuries or brain trauma are not apparent until much later. Follow the advice of emergency medical personnel, particularly if you are injured. Additionally, there are other steps to take after an accident, including:

While at the scene, be careful what you say to the police and to other drivers involved in the crash. Do not admit fault because this can be used against you later, particularly if there is a lawsuit.

Potential Damages After a T-Bone Accident

Victims of a T-bone crash have a right to seek damages, even if they are partially to blame for the accident. These include:

If you have been injured in a side-impact crash, you should contact a personal injury lawyer. Call the Law Office of Matthew A. Lathrop for a free consultation to discuss the details of your case.